Seth Godin wrote today of Low Esteem and the Factory, of how many companies are still looking for employees they can categorize, command and dominate.  He writes:

If you want to raise your game and build an organization filled with people who will change everything, the first thing to look for is someone who hasn’t been brainwashed into believing that they’re not capable of great work.

I’ve worked with both the categorized, commanded and dominated and with those who believe they are capable of great work.  I’ve found both groups easy to understand and interact with while driving change.

The group that seems to give me the most trouble are those who’ve seen others doing great work, want to do great work themselves, but struggle with the journey to a place of confidence.  They’ll stick their hands up and volunteer for an exciting project, then linger along the edges of the meeting room, not wanting to push to the front too quickly.  They’ll wait weeks to ask a question, I’m assuming for fear of looking foolish for needing to ask.  I think they look foolish for wasting weeks on needless worry; so I tell them not to wait next time and nothing they ask is foolish.

To all of you reading this who are in that journeying middle–and really this goes out to anyone reading this blog–read Linchpin by Seth Godin.  Learn about art, the resistance and why you have an unprecedented opportunity to bring all of yourself to your work, to live your art and to be magnificent.

You can do great work.

You will do great work.

Start saying, “They could be…”

Stop keeping Mike pigeonholed as the guy who peed his pants in first grade or Suzie labeled as the perpetual teacher’s pet.

Quit dwelling on that time Danny missed his deadline or all those times last year when Wanda couldn’t decide in time to seize huge opportunities.

I’m not saying to pretend people are something they’re not.  I’m asking you to acknowledge the skills, knowledge or abilities they have today and then aim them toward something higher.  Aim them toward their “could be.”

For the high school football team who’s never been state champions; teach them a drill they can run to perfection, improving their game and their confidence.  Maybe they’ll win.

For the work group that’s never met a deadline; implement a work flow process that frees the group from bad behaviors and helps them ship on time.  Maybe they’ll meet their deadlines.

For the managers that never seem to decide in time; create a meeting dedicated to making the decision and make clear the potential consequences of not deciding: loss of future business, or credibility, or something else that matters to them.  Maybe they’ll decide.

That’s a lot more than “they’re only…”

Today, I got into a disagreement over a blog post.

In the blog post, the author offers one way to move the people of an organization from stopped-and-waiting toward innovating-and-creating.

My response to the blog post was swift: That won’t work.

That: The actions (and cautions) the author prescribes.

Won’t work: Will not produce the capacity for independent innovation within the employees.

Sure, the manager will happily hold a meeting, define the conditions and maybe get some actionable solutions.  Yet, the goal of the actions prescribed isn’t to produce action at the moment, but the capacity for action in the future.

Now, why am I reacting so viscerally to what should be a harmless, one-of-many options blog post about generating a new culture?  Because too many of the options offered up in blog and magazine articles read like useful directions yet fail to produce the actual outcomes they claim to achieve.   My emotional response comes from my frustration watching well-meaning people squander their often limited energies on action that create the desired outcome less than 2 in 10 times.

With all the blogs out there (this one included) trying to help you create positive change, I bet you need some way to split the good advice from the bad directions, and test the effectiveness before taking any action.

As luck would have it, I have a method to show you how I map the options to find what will work. END_OF_DOCUMENT_TOKEN_TO_BE_REPLACED

In my own, fully experimental, non-research supported method, I’ve found two ways to judge someone’s capacity for speed (of change).

1.  Listen for their verbal clues.  What do they say when presented with something much better, faster, cheaper than they thought possible?

Do they verbally lean into the speed of the change and say:

Or do they instead:

2.  Watch for the behavioral clues.  What do they do when presented with something much better, faster, cheaper than they thought possible?

Do they physically lean into the speed of change and:

Or do they instead:

How fast can Suzie or Julie, Danny or Jay go?  Is she, or is he, leaning into or pulling back from this change (or from all change)?

Sometimes knowing the answer to “How fast can you go?” of those around you is enough to keep you moving, if only because the knowledge points you in the opposite direction of the change-killers. 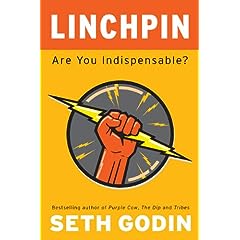 Seth Godin launched his new book Linchpin this week.  I think I’ll be buying it this weekend.  Wondering why I’m in such a rush?  Check out these excerpts from the Amazon.com write up.

There used to be two teams in every workplace: management and labor. Now there’s a third team, the linchpins.

These people invent, lead (regardless of title), connect others, make things happen, and create order out of chaos. They figure out what to do when there’s no rule book. They delight and challenge their customers and peers. They love their work, pour their best selves into it, and turn each day into a kind of art.

Linchpins are the essential building blocks of great organizations. Like the small piece of hardware that keeps a wheel from falling off its axle, they may not be famous but they’re indispensable. And in today’s world, they get the best jobs and the most freedom.

As Godin writes, “Every day I meet people who have so much to give but have been bullied enough or frightened enough to hold it back. It’s time to stop complying with the system and draw your own map. You have brilliance in you, your contribution is essential, and the art you create is precious. Only you can do it, and you must.”

Plus, Steve Holt, an Engine for Change follower and fast friend of mine,  is featured in this image inside the front cover.  Congratulations Steve for being a Linchpin.

Think you know a Linchpin?  You can nominate your own at whoisthelinchpin.com

With the difference in results, you would think most people trying to make a change would be driving change. Yet most  are daily driving people.

How can you tell which one you’re doing?  First you need to know the descriptions and definitions of each term.

Let’s picture something together.

You and 20 other people live in the middle of a huge forest.  Last night the forest was hit by a terrible storm.  The only road to get out of the forest was in bad repair before, but surveying the damage this morning you see newly downed trees and whole sections of road were washed out by the overflowing streams.  The goal is to get the 20 people and you out of the forest.  You aren’t the boss.  You’re just one of the 21 people.  But, the boss has instructed you to get everyone out of the forest, including him.  What do you do? END_OF_DOCUMENT_TOKEN_TO_BE_REPLACED

Here’s a re-post of something I put up at my other blog.  There’s no link back, just a re-post.  Call this moving content from the old to the new.  As I got only minor comments on this last time I posted it, I’ll hide it behind the fold so if you really want to read it you can find it, but if you don’t it won’t hurt your scan of the page.  Enjoy: